Guns in TV: The Walking Dead

Guns in TV: The Walking Dead 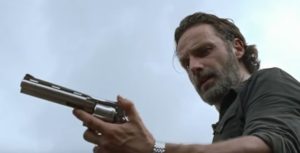 Guns in The Walking Dead

The Colt Python is main protagonist Rick Grimes’ partner in crime, so to speak. The very first time we see Sheriff’s deputy Grimes in episode one, he’s equipped with the one of the most iconic guns, the revolver. The Python is a silver .357 magnum revolver with a six-inch long barrel. It’s realistically depicted as a very powerful and heavy. One scene in the first episode shows Rick shooting a zombie inside a small enclosed space and the noise from the gun nearly deafens him and disorients him terribly. This gun appears throughout the entire series as Rick’s go-to zombie killing weapon.

Rick’s friend Shane, also a former police officer, carries with him a generation 3 Glock 17. He can be seen using it in season one, but this gun receives special attention in the beginning of season two while Shane is cleaning it—then later shows Andrea try to reassemble it when a small group of “Walkers” attack. This gun is later carried throughout the series by Glenn.

Even more so than the Glock 17, the Mossberg 590 is Shane’s gun of choice. The Mossberg 590 is a powerful tactical 12 Gauge shotgun. He is seen in all the promotional images for the show holding one. His Mossberg has an extended magazine, a pistol grip, and a heat shield. Throughout season two, Shane, as well as others, fire this weapon.

Whether you’re a fan of The Walking Dead or not, you probably know about the Governor. Being the most iconic villain in the series means we should probably talk about this character’s gun of choice as well. His Beretta 92SB has a wood grip and a shiny nickel finish. This gun is used in a number of dirty deeds committed by the Governor.

This powerful M4 carbine is used by virtually every character at some point in the show. It’s fast, heavy, and reliable and just right for a zombie apocalypse. How fun would it be to shoot one of these?

Daryl’s crossbow just might be the most iconic of weapons in The Walking Dead. Now the Stryker obviously isn’t technically a gun, it’s usefulness and versatility proves beneficial to The Walking Dead team—this article just wouldn’t be complete without it.

Want to Use Guns in The Walking Dead?

Machine Gun Experience has guns used in popular TV shows and a wide variety of weapon packages. They give you the opportunity to fire weapons like they do in the zombie apocalypse. Our guns are the same or like the guns in The Walking Dead, so sign up for your experience today at Machine Gun Experience.